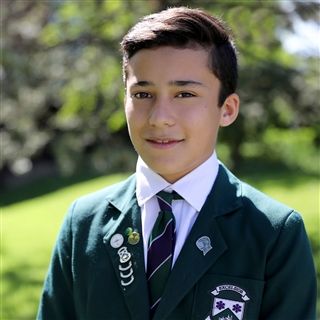 Growing up at HSC, Liam was taught at a young age the importance of giving back, and in Grade 5 his interest in volunteering was sparked when he discovered the Junior Duke of Edinburgh Award, which led him to helping out at a local school’s garden. He then became involved with Hamilton Victory Gardens, a non-profit organization dedicated to providing fresh produce to local food banks. He has also given his time to a number of campus events, having volunteered at events such as HSC’s Open Houses and Grandparents Day.

In addition to helping out within the HSC and Hamilton communities, Liam’s dedication to furthering his education both inside the class and out was recognized when he was named the recipient of the Robin Polson Celebration of Life Award. This award honours a Grade 5 student who puts exceptional energy and effort into their academic and co-curricular life at the College. In Grade 6 he became a sports representative for his house, and in Grades 6 and 7 he helped welcome new students as one of HSC’s student ambassadors. During his Grade 8 year, Liam was once again involved as a Maple House Captain.

Between his classes and being such an active volunteer, Liam has still found a way to pursue his arts and athletics passions. From choir and band to soccer, basketball, rugby and track and field, Liam has found a way to follow his passions, while encouraging his peers, winning leadership awards in his musical and athletic endeavours.

“I recognize how important it is to work hard and be a role model in everything you do. I try to put my best effort forward and put others before myself.” 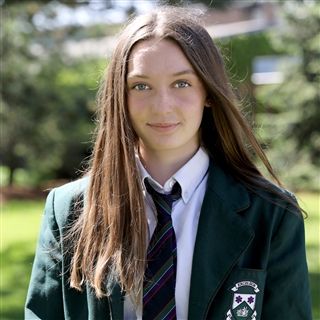 In addition to her athletic pursuits, Elise achieved honour roll status throughout her time in the Middle School, received an academic award in Grade 7, and was recently accepted into enriched math and French classes. She has also been actively involved in volunteering at U10 soccer and track and field practices, has been a team captain, and is a sports representative. She is an HSC Executive Ambassador and communicates with other ambassadors, assists with campus events, welcomes new students to HSC and works to encourage and motivate her peers.

“I truly love helping people and being a leader. Every chance I get to help someone, I will always try to do so. With all my leadership opportunities, one thing I have learned is that to be successful doesn’t mean to be victorious. It means to be able to motivate and encourage someone to be their best self and to try their absolute hardest.”
myHSC Login     Career Opportunities     Privacy Policy     Accessibility Plan
Located in Hamilton, ON, Hillfield Strathallan College is a Canadian independent, co-educational day school.
The academic program runs from Montessori Toddler and Pre-K to Grade 12.